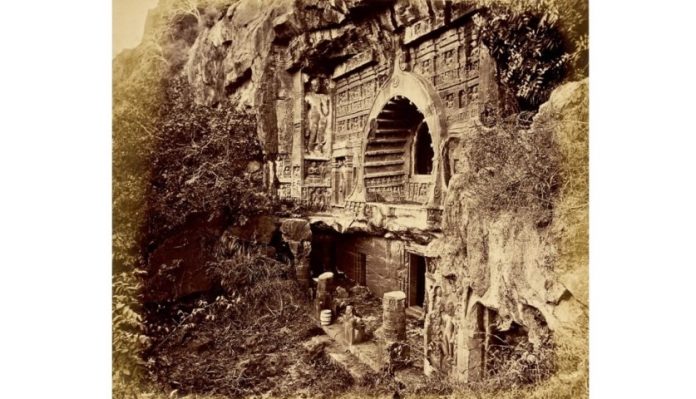 British army officer John Smith may not have slain a tiger on his hunting expedition but he returned with a find that was much more precious. The year was 1819 and the young captain in the Madras Regiment was scouring the wilds in what is now interior Maharashtra when he heard a voice calling out to him.

He soon spotted a young shepherd boy keen on making a quick buck on the promise of pointing the sahib in the direction of tiger territory. This unlikely pair was standing some distance from the Waghora (Tiger) River, now in Aurangabad district, and the captain’s eye carefully followed the direction the boy was indicating.

He was pointing to a spot on the cliff high above the river. From this distance, all Smith could see was a patch of golden-red between a few stone-carved pillars or columns.

Excited at the prospect of making an important archaeological discovery, Smith put together a party of villagers.

Armed with torches, axes and spears, they cleared a path to what Smith was convinced was a series of caves set into the cliff in a horseshoe bend in the river.

When he finally made it up to the caves, Smith stepped inside one of them. Nothing could have prepared him for what he saw. Gazing back at him was a large sculpture of the Buddha, his serene visage unmoved by the shock and awe on the Englishman’s face.

On the cliff, all around Smith, were monastic halls, their ceilings and walls covered in delicately painted frescoes.

The Englishman had stumbled upon one of the greatest finds of the century in India – the Ajanta caves, whose exquisite paintings are among the finest examples of ancient Indian art. Located amid forested hills in a remote region, these Buddhist rock-cut temples date back to between the 2nd century BCE and the 6th century CE. Captain John Smith was the first European to stumble upon these caves, and to mark his place in history, he did the unthinkable – he scratched a piece of graffiti on one of the priceless frescoes. Visible to this day, in Cave 10, it reads: ‘John Smith, 28th Cavalry, 28th April, 1819’.

News of Smith’s discovery spread quickly. Sir James Alexander, Scottish military officer and an author, who visited Ajanta in 1824, was the first to publish an account of these astonishing cave paintings. It was published in the Transactions of the Royal Asiatic Society of Great Britain and Ireland in 1829. In 1836, English scholar and orientalist James Prinsep published in the Journal of the Asiatic Society of Bengal the notes of a Mr Ralph on his visit to the caves and detailing how a Dr James Bird, a residency surgeon of Satara, on September 21, 1826, “contrived to peel off four painted figures” from a wall “notwithstanding protestations about defacing monuments”. Dr Bird had visited the caves on the instructions of Sir John Malcolm, then the Governor of Bombay. Unfortunately, later visitors too peeled away bits of these ancient paintings, including a caretaker who handed out fragments to visitors as ‘mementos’ for a paltry sum.

In 1839, the Bombay Courier published a fairly informative description of Ajanta written by Lieutenant Blake, an officer in the Madras Army. James Fergusson, the celebrated author of monumental works on Indian architecture, visited the caves during the same year and, in 1843, submitted his paper titled Rock Cut Temples of India to the Royal Asiatic Society.

Appalled at the rampant vandalism and neglect of Ajanta’s paintings, Fergusson led a campaign to save the fragile artwork in the caves. He was the first to recognize their Buddhist origin and dated the work from around 200 BCE to around 650 CE, “I numbered them like houses in a street,” he wrote, his numerical order becoming their accepted nomenclature.

Fergusson thus succeeded in attracting the attention of the Court of Directors of the East India Company, which appointed Major Robert Gill of the Madras Army to make facsimile copies of all the paintings in the caves.

It was a seemingly impossible task but Major Gill seized the challenge with vigour and enthusiasm, so that he could bring them to the attention of the scholarly world. Thus, in 1844, he began producing replicas of Ajanta’s glorious frescoes and he took more than 20 years to complete a series of copies of frescoes that were of salient interest.

Major Gill worked in truly difficult conditions. Apart from the obvious challenges and unbearable heat, the caves were located in tiger country inhabited by the Bhil community, who did not take kindly to ‘invaders’. Twenty-seven of Gill’s canvases, oil reproductions of the murals, were displayed at the Indian Court at the Crystal Palace at Sydenham in South London. Sadly, they were destroyed without having been photographed, in a fire in 1866.

The stoic major returned to Ajanta, this time armed with a camera as well as brushes, to start all over again. But he died there a year later. An idea of the copies destroyed in the fire may be gleaned from the woodcuts published in Mrs Spier’s Life in Ancient India (1856). They were reproduced from the tracings of Major Gill’s copies. The five copies that have survived are now in the Indian Section of the Victoria and Albert Museum in London, then the South Kensington Museum.

Meanwhile, the Royal Cave Temple Commission founded by the Royal Asiatic Society in 1848 had led to the setting up of the Archaeological Survey of India in 1861. As the international spotlight stayed firmly on Ajanta, concern for the frescoes grew. Tragically, the interest thus generated also drew a number of visitors to the caves, including treasure hunters who scraped the paintings off the walls. One of the few known surviving paintings to have left Ajanta intact is in the care of the Museum of Fine Arts, Boston in the US, today. In 1924, it sold for £1,000 at Sotheby’s in London.

The Second Effort
In 1872, John Griffiths, Principal of the Sir JJ School of Art, Bombay, along with his students recommenced the work undertaken by Major Gill on the orders of the Government of Bombay. For ten years, he and his students produced 300 paintings. Of these, he dispatched 125 copies of the paintings to the South Kensington Museum, where they were displayed. Again, 87 of these copies were destroyed in a fire in 1885, but fortunately not before they had been photographed. From the copies that survived the blaze, Griffiths compiled his work, of truly monumental importance, on The Paintings in the Buddhist Caves at Ajanta, published in 1896.

The Third Effort
In 1909, Lady Herringham, suffragette and art patron, made further copies with the help of the Calcutta School of Art. In 1911, she completed the third effort to make, on an extensive scale, copies of the paintings. Preserved at the Victoria and Albert Museum in London, they were also reproduced in her book, Ajanta Frescoes, in 1915. The book contains a portfolio of plates, mostly coloured, which provides a clearer idea of these stunning murals. Two of her Indian assistants went on to become great artists, Nandalal Bose and Asit Kumar Haldar.

Another Effort
Another attempt to make copies of the murals was made by Japanese artist Arai Kampo, who had been invited to India by the great litterateur and poet Rabindranath Tagore, to teach Japanese painting techniques. Kampo made copies with tracings on Japanese paper from 1916 to 1918, and his work was conserved at the Tokyo Imperial University until the materials perished in the Great Kanto earthquake of 1923.

The Nizam’s Campaign
The Nizam of Hyderabad, under whose jurisdiction the Ajanta caves then fell, was persuaded to have the paintings restored. He thus authorized his Archaeological Department to have a complete photographic record prepared, with the active encouragement of his able Finance Minister, Sir Akbar Hydari.

They were assisted by Sir John Marshall, Director-General of the Archaeological Survey of India. The greatest achievement of the Nizam’s Archaeological Department was the meticulous conservation of the Ajanta frescoes at a cost of Rs 30 lakh. This was done with the help of two experts from Italy, Professor Lorenzo Cecconi and his assistant Count Orsini.

Major Robert Gill had applied a thick coat of varnish to protect the mutilated, crumbling paintings from the creeping moisture of the monsoons and to make their colours more vivid. The process had blurred the original brushwork and the varnish had done irreparable damage to the fast-fading murals.

These two Italian experts worked at Ajanta from 1920 to 1922, delicately removing the old varnish, dirt and smoke from the surfaces, with breathtaking results. This extended the life of the frescoes by a couple of centuries.

The Archaeological Department, with the assistance of M Foucher, the celebrated French savant, published “an authoritative account of the paintings both from the artistic and iconographic points of view”. On the orders of the Nizam, roads, bridges and a large and comfortable rest house were built for the convenience of visitors to Ajanta.

Malik Ambar; The Architect of Aurangabad

Chhota Bhadkal Darwaja : The only L shaped gate in Aurangabad

Why we should ask for Better Streets and not Wider Roads…